Scan the headlines about the Chinese in Africa and the predominant theme focuses almost exclusively on the infrastructure-for-natural resource deals.  The Chinese are signing multi-billion dollar oil and mineral deals up and down the continent while spending a comparable fortune building desperately needed infrastructure in many of the least developed countries on earth.  Here in Kinshasa, evidence of China’s foreign and trade policies is everywhere.  New roads, hospitals, parliament buildings are all being built at record speeds by Chinese construction conglomerates.  Yet not far away from the heavy earth moving trucks and the billion dollar mineral deals, a separate, yet equally transformative revolution is underway.  Quietly, tens of thousands, possibly even  hundreds of thousands of Chinese immigrants are moving in to neighborhoods across Kinshasa and dozens of African cities.  While there is no reliable data available to estimate just how many emigres have come here, there is no doubt the Chinese population is rising quickly.
When I first heard that Kinshasa was now home to thousands of Chinese immigrants, I naturally assumed there would some sort of “Chinatown” with a population cluster just as there is in Paris, Los Angeles, Buenos Aires and even Asian cities like Kuala Lumpur.  It just made sense that the first wave of Chinese arrivals would huddle together as immigrants have done the world over for generations.  ”So where is the Chinese community?” I asked a several of our local staff.  Puzzled, they responded “what do you mean? There is no Chinese community here, they live with us.”  Time and again I received the same answer.  The Chinese immigrants in Kinshasa are skipping an entire phase of assimilation by moving directly to the sprawling neighborhoods and shantytowns that is home to the capital’s 8-10 million residents.  By any standard, this is a remarkable phenomenon as there are few more seemingly divergent cultures than Chinese and Congolese.  Yet despite overwhelming differences in language, race and culture, the Chinese are adapting in ways that Westerners could never begin to imagine.

Mister Chen is one of those thousands of new arrivals to Kinshasa.  He and his family moved from China’s southern Fuzhou province three years ago to come to Africa.  When he first learned of the opportunity to come to the DRC he admitted that he knew nothing about the country as was made clear by their decision to settle in the eastern Congolese city of Kivu.  Traveling over land from the Rwandan capital of Kigali, they arrived in Kivu unaware that it is the epicenter of Congo’s violent 10-year war.  Hundreds of thousands of people, possibly millions, have died in the region surrounding Kivu and after three weeks he packed up his family to move west across the country to the relative safety of Kinshasa.  Upon arrival here he was introduced to a “Chinese association” that would provide him the logistical and financial support for him to open a small shop in one of Kinshasa’s vast, densely populated neighborhoods.  These associations are critical to understanding the success of the Chinese, both here in Kinshasa and the world over.  Just as Chinese immigrant associations in San Francisco and New York, the Chinese associations in the DRC provide what is essentially a micro-loan to new immigrants and the necessary logistical support to open a small business.  The association handles the legal paperwork, ensures the necessary bribes are paid to relevant neighborhood police and government authorities; connects the shop owner with a distribution network of Chinese importers to supply their business.  Mister Chen said he arrived from China with “only a few dollars” but was able to get his start through the help of the association.  In turn, as his business develops, he re-pays the association back in small increments until the loan is fully paid.  The association also plays another critical role that insulates the shop owner from the volatility of daily life in Kinshasa.  When the police or some other government authority comes to his store for bribes or extortion, he simply calls the association who then quickly respond to handle the situation.  This rapid response and protection from the association is an immensely important aspect of the Chinese entrepreneurial success here as it offers a level of reliability largely unavailable in a society as unstable as Kinshasa.
Mister Chen’s store has the feel of an inner-city American liquor store where all of the products are on display behind a think glass window.  He largely sells

cheap, low quality Chinese-made knick-knacks that range from one-dollar headphones to shoes to plastic tableware.  Although business in his 1,500 square foot (estimate) shop was brisk during my 45-minute mid-day visit, not once did I see him sell a single product.  Instead, locals would approach the counter, throw down a $20 or $50 US bill and he or one of his local staff members would hurl a wad of Congolese francs and dollars back at the customer.   In addition to selling low-cost Chinese imports, shop owners like Mister Chen have also established themselves as among the most reliable money changers in the city.  ”I trust the Chinese more than I do Congolese,” one customer explained when I asked why he changed his money with Mister Chen and not at one of the countless money changers on the street.  ”They give us a fair price and don’t cheat us.”  By selling low-cost products along with doing a brisk currency trading business, Mister Chen said he is able to squeeze out a small profit.  ”It’s not a lot because the Congolese are very poor but I earn more here than what I was making back in Fuzhou,” he said.
When you consider the hundreds of billions of dollars Western governments and NGOs have spent in Africa to help build civil society programs none seem anywhere near as effective as what Mister Chen is doing.  His small business is simultaneously providing jobs, goods and services that are vital in a region desperate for this kind of economic activity.   Mister Chen does not think of his business as anything other than a means to earn a meager living.  What he may not realize is that what he and his family are doing is part of a larger, more powerful trend that will re-shape Africa in a far more profound way than any of the roads and hospitals Beijing is building here. 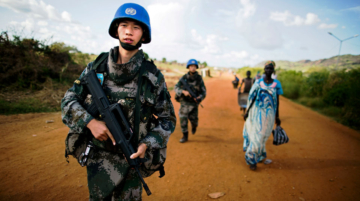 China is the second-largest funder of UN Peacekeeping Operations (PKO), behind the United States, and the largest troop contributor to PKOs in Africa among the UN’s permanent members of the Security Council. Last December, China’s ... 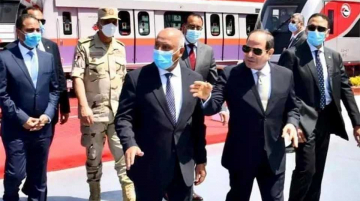 Egyptian President Abdel Fattah Al-Sisi boarded a Chinese-made train on Wednesday for a glimpse of what the new electrified metro railway will be like when it ferries commuters to and from the country’s new ... 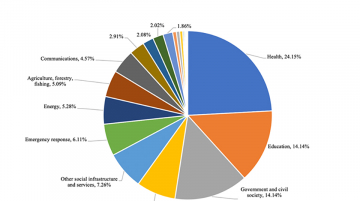 For much of the past 20 years, China has been the indispensable actor in African infrastructure development, financing the construction of thousands of kilometers of new railways and roads along with ports, airports, and power ...
Previous Story: The West’s Tragic Blindspot in Africa
Next Story: Rant: China Might Want to Consider Soft Power Too