Chinese law magazine “Rule of Law Weekly” interviewed six Chinese people who are working in Africa.  Each individual works in a different country and they all have a story to tell.  The following is the second installment in the six-part series.
Algeria
Rule of Law weekly reporter Gao Yin   Translation by Erik Myxter
July 2012, Wang Qing (pseudonym) was sent the North African country Algeria to work as in human resources for a Chinese telecommunications company.
Before arriving, she was worried about disease, but after she arrived she discovered that there was no need to worry.  She enjoyed the friendly environment and has since gradually started to enjoy her new life.
In Algeria there are many Chinese companies.  The largest companies work mainly in infrastructure such as building bridges, roads and so on.  Wang Qing feels that the local people are quite kind to the Chinese here, “They think Chinese people are very hard working.”  she said.
Our company has a very mature representation department to handle local affairs, this makes room and board very convenient.  Also because it is a Chinese company, the local employs believe that the Chinese workers are the boss, so there isn’t much trouble with communication at work.” she noted.
Wang Qing’s is in constant correspondence with local employees, because of that one must be proficient in English.  One also must be well acquainted with local labor laws and personnel policies but even with this knowledge, the company cannot avoid sometimes having to deal with the local labor bureau.
“The local people handle affairs in a laid back manner.” she says.
Although Wang Qing has been involved and familiar with local laws and policies, after she arrived in Africa, the company and her colleagues informed her on some important matters and gave her a formal introduction and training on the local laws and regulations.
This did not have any effect on Wang Qing’s very quick adaptation to Algerian life.  “Sometimes Chinese people who live here complain about the food because they cannot eat pork.” she said, “But the thing I love most about here is the non-polluted, blue sky.  At first glance the green grasslands looks like the setting for the Lord of the Rings movies.”
The area has incredibly abundant natural resources, but at the same time many local people are out of work, “If they can take full advantages of their resources, the economy will grow very quickly.”
Living in Africa, entertainment activities are limited and not as vibrant as those in China.  Living in Algeria took some time to adapt but  “When I discovered Africa’s attractive places, I started to fall in love with life here.” she said.
Her time after work is often spent with her fellow co-workers, going out to see the beautiful scenery, walking, or tasting the delicious local food.  “At work I have many Algerian colleagues and they have all become good friends of mine.” Wang Qing said.
As for the future, Wang Qing says that she cannot stay in Africa for a long time, “Because I have family (in China)”.
阿尔及利亚
法治周末记者 高欣
2012年7月，王青(化名)被所在中国某通讯企业，派至北非国家阿尔及利亚，主要负责公司的人力资源工作。
出发前，她最担心的是疾病。但过去之后，她发现并不需要担心。而当地宜人的气候，让她渐渐能够享受这里的新生活了。
在阿尔及利亚，中国企业非常多，主要是基础设施建设，如桥梁、道路等。王青感觉，当地人对中国人比较友好，“认为中国人勤奋”。
“我们公司在当地有非常成熟的代表处，衣食住行都非常方便。因为是中国公司，本地员工会认你是boss(老板)，工作沟通无大障碍。”她说。
王青的工作与当地员工打交道较多，因此英语需熟练，对当地劳动法及相关人事政策需要比较了解，也免不了和当地的劳动局打交道。
“本地人办事不慌不忙。”她说。
虽然已对工作所涉及到的当地 ” 法律及政策较熟悉，但王青告诉记者，她刚到非洲时，公司和同事告诉自己一些在阿的注意事项，并未正式接受过有关当地” 法律法规的介绍或培训。
这并不影响王青很快适应了在阿生活。“在这里的中国人，就是偶尔抱怨下饮食，因为不可以吃猪肉。”她说，“最喜爱的是这里没有被污染过的” 蓝天和一眼望去如电影《魔戒》中的绿草原。”
当地有非常丰富的物质和资源，但不少当地人没有工作，“如能充分利用，经济会发展非常快”。
在非生活，娱乐活动比较少，不如国内丰富。但王青觉得，这需要自己去调节适应。“只有发现了非洲有魅力的地方，同样也会适应并爱上这里的生活。”她说
工作以外的时间，她会和同事一起，或到风景区旅游，或散步，或品尝当地美食。“在公司上班的很多阿尔及利亚同事，也都成为大家的朋友。”王青说。
提及未来，王青表示不会长期呆在非洲，“为了家人”。

Chinese People in Africa: An Inside View Into Their Daily Lives (Translation) Part 5 – Angola 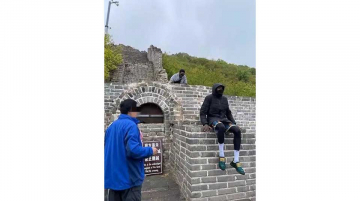 A pair of Senegalese tourists visiting the Great Wall last month learned a lesson of what happens in China when you break the rules. The two ventured into “wild” and “undeveloped” areas of the wall ...

The Back Story of China’s Most Popular Vlogger in Africa 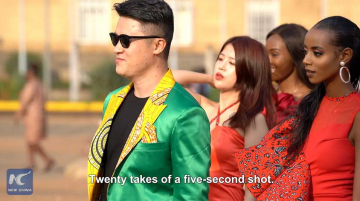 Wang Yao had lived in East Africa for more than a decade and became increasingly frustrated with the way that Africa was depicted in the Chinese media. When he searched for “Africa” on search engines ...
Previous Story: Will Western Media Report Good News About the Chinese in Africa?
Next Story: Chinese People in Africa: An Inside View into Their Daily Lives (Translation) Part 3 – Ghana