Chinese law magazine “Rule of Law Weekly” interviewed six Chinese people who are working in Africa.  Each individual works in a different country and they all have a story to tell.  The following is the first installment in the six-part series.
Chinese People in Africa: An Inside View into Their Daily Lives (Translation)
April 24th 2013 1:27am   Source: Rule of Law Weekly Reporter: Gao Jin Translation by Erik Myxter
Although it acts as a major transportation hub for several continents, today the Dubai airport feels a bit like a Chinese airport.  Look around and about 80% of who you will see are Chinese business men, company employees, government officials and workers.  Their next stop: Africa.
On March of this year the newly appointed head of China, Xi Jinping arrived in Africa to make visits to Tanzania, South Africa and the Republic of Congo.  He also was one of the major leaders to attend the fifth ever BRICS summit in Durban, South Africa.
Although Africa’s economy has a weak foundation and its infrastructure is in need of improvement, however the area is rapidly developing and the potential market is huge.  With each passing day Chinese-African relations are becoming deeper, and more and more Chinese people are choosing this completely wild and hopeful land to work and live.
But for many people who have not been to Africa, Africa still is somewhat of a mystery.
Where in Africa are there Chinese people? What do they do for work? How do they live? What kind of “African Rules” have they encountered?
Nigeria
Rule of Law Weekly reporter Gao Jin
Five years ago, Zhou Yifeng (pseudonym) was sent to work for a company in Nigeria.  Before this time he had already gone to Egypt, Kenya and a few other countries for short vacations, so when he was preparing to go to Nigeria, he wasn’t very worried.
When he arrived, Zhou Yifeng still felt the same: “It has been a little better than I expected.  I hadn’t had any culture shock.”
More differences started to become apparent in his experiences with customers and his living environment.
As an employee of a major Chinese automotive parts company, Zhou Yifeng’s work in Nigeria made him often have to deal with other local businesses.  “The local people have respect for big Chinese companies”, he said.
Outside of his time at work, Zhou Yifeng likes to hang out or stay at his home. In his eyes, Africa is like a semi-virgin land. “If it is a country with a good environment, and has law and order, I can lead a long life here”, he said.
作为几大洲的交通枢纽，如今的迪拜机场有些像中国国内机场，到处都是中国人的面孔。商务人士、公司职员、国内官员、务工人员……80%的中国人，下一站会是非洲。
今年3月，新任国家主席习近平也来到了非洲，并出访坦桑尼亚, 南非和刚果(布)三国，还出席在南非德班举行的金砖国家领导人第五次会晤。
非洲经济底子薄，基础设施待完善，但却是一个快速发展的地方，市场潜力巨大。在中非关系日益深化的今天，越来越多的中国人选择来到这片充满野性和希望的大陆上，工作、生活。
而对于许多并未到过非洲的国人来说，非洲却依然显得有些神秘。
那些在非洲的中国人，怎样工作、生活？他们遭遇过怎样的“非洲规则”？
法治周末记者采访了6位在非工作、生活的国人，他们在不同国家、从事着不同职业。每个人都有一段真实而独特的非洲故事。
尼日利亚
法治周末记者 高欣
5年前，赵一峰(化名)被公司派往尼日利亚。之前，他已去过埃及,肯尼亚等地做短期旅游，所以赴尼日利亚之前，他并未有太大担心。
到了当地，赵一峰还是感觉到：“比想象中要好一些。没有文化冲击。”
更多的差异，体现在客户和生活环境上。
作为国内某大型汽车零部件企业员工，赵一峰在尼日利亚的工作经常需要和当地企业及有关部门打交道。“当地人对来自中国的大企业多是尊敬的。”他说。
工作以外的时间，赵一峰或闲逛、或宅在家。在他看来，非洲就像是一片半处女地。“如果是环境好、治安好的国家，是可以长期生活的。”他说。

Chinese People in Africa: An Inside View into Their Daily Lives (Translation) Part 3 – Ghana 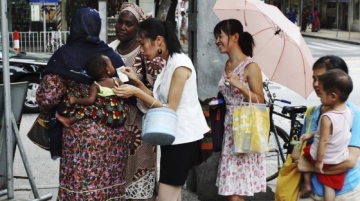 With a Golden Boot on Her Foot, Barbara Banda Returns Home From China as a Star 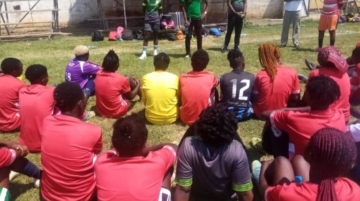 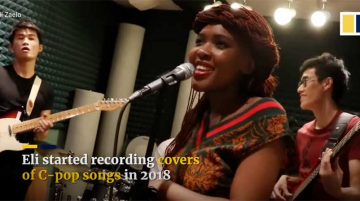