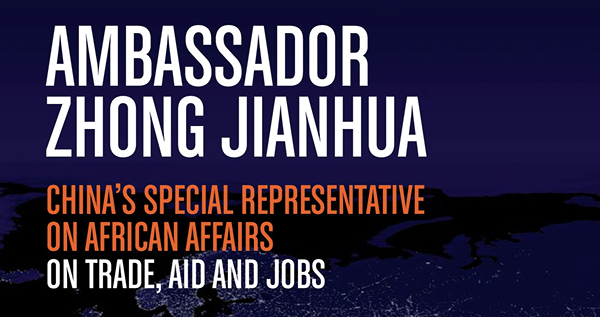 By Edward Paice and Jonathan Bhalla of the Africa Research Institute
“China: friend or foe?” was the title of a special Q & A session with the BBC’s World Affairs Editor, John Simpson, on Tuesday 30 July. Of course loaded leading questions – cast in binary terms – tend to produce answers that are of little value. “China is neither good nor bad. China is a combination of these things”, says Zhong Jianhua, China’s Special Representative on African Affairs – a far more satisfactory starting point for discussion.
Nowhere is the debate about China’s motives and practices more live than in Africa. China is either the saviour the continent has long awaited, or neocolonialist gargantuan solely intent on sucking up oil and minerals as fast as it can in the murkiest possible fashion. The reality is more complex – and it is evolving far more rapidly than the stilted relations between Africa and the West.
In March 2013, Lamido Sanusi, Governor of the Central Bank of Nigeria, delivered the boldest assessment to date of China-Africa relations by a senior African policymaker. In an open letter to the Financial Times, he argued that Sino-African trade patterns were “a significant contributor to Africa’s deindustrialisation and underdevelopment” and smacked of “the essence of colonialism”.  He called on Africans to “remove their rose-tinted glasses through which we view China”. The dragon-slayers cheered. The immediate response from China was muted and, when it came, more considered.
Zhong Jianhua is the most senior Chinese government official to have voiced his reaction to Sanusi’s accusations in detail and on the record. In an interview with Africa Research Institute, an independent and non-partisan think-tank in London, Zhong was characteristically urbane. “I would argue that Mr Sanusi made a number of important points that have been overlooked”, he says. A highly respected career diplomat, Zhong knows the form. But his take on the broadside from Nigeria, China’s fourth largest trade partner in Africa, is also illuminating.
For Zhong, the most important feature of Sanusi’s polemic is his insistence that Africa must start to compete with China. “Africa is strong enough to fight economically”, says Zhong, “but this is the first time we are hearing that it is willing to do so. I welcome this kind of attitude”.  He believes that Africa’s dilemma is similar to that confronted by Deng Xiaoping’s China in the late 1970s and early 1980s. China chose to modernise and industrialise by “opening up” [Chinese word] and “going out” [Chinese words] – it chose to compete.
The process was “a hard battle” for China, akin to a “revolution”, according to Zhong. While Africa is “on the point of take-off”, its leaders will need to steer through something similar to achieve sustainable and transformative development. It will require revenues from raw materials “to be managed and invested well”, and investment in skills if the continent is to compete for manufacturing jobs. As it was for China, commercial agricultural development – small and large scale – is an absolute pre-requisite for Africa. Above all, it will require determination, tenacity and visionary leadership.
Is the positive, supportive rhetoric merely the stock-in-trade of China’s top diplomat in Africa? Maybe, but often overlooked in any discussion of China’s engagement with Africa is the vulnerability of China itself. The political project of the Communist Party of China is almost entirely reliant on foreign markets and resources to drive its economy and legitimise the state.  Although it is the world’s second largest economy, China also remains a developing economy confronting immense challenges. Counter-intuitive as it may seem to Africans who lament their lack of bargaining power, China and its partner countries in Africa are mutually dependent.
This is a point and opportunity grasped – unsurprisingly – by Sanusi, but not by all African policymakers. Just as China’s deep pockets, “can do” mentality, and respect provided resource-rich African governments with unfamiliar and welcome room for manoeuvre on the international stage during the 2000s, options for dealing with China in its many guises have now emerged. The canny have learnt fast and are reading the game well – something that Zhong acknowledges China needs to emulate when he asserts “we want – and need – to improve our understanding of Africa”.
Playing hard-ball with China may not be an option for every African government. But understanding that the Chinese government feel morally obliged to give if they are also to take is imperative – as is knowing what to ask for. Sanusi knows what to ask for – he has effectively challenged China to deliver jobs to Nigeria if it wants greater access to oil and other commodities.
Sanusi rejects “a divorce” from China. He is far too pragmatic for that. But he has called time on the honeymoon and has set out his terms – the tough business of making the marriage work has begun. He is likely to find China receptive. “We are happy to move forward together,” says Zhong. “Chinese reform and prosperity have benefitted the whole world – and African development and prosperity will also benefit the whole world”.
Although there will still be much talk, particularly from China, of win-win relationships with Africa – and of Chinese neocolonialist exploitation from Africans – patterns of engagement which emerge in the next decade will be much more complex, even messier, than in the last. This will be confusing for the dragon-slayers and panda-huggers: “China: friend or foe” will prove be a singularly inadequate frame of reference. But it will be fascinating for the rest of us to observe.
Edward Paice is the Director at Africa Research Institute
Jonathan Bhalla is the Research Manager at Africa Research Institute 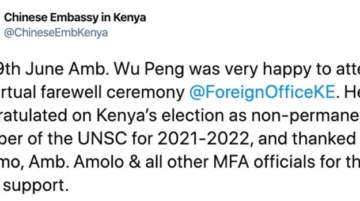 China’s outgoing ambassador to Kenya, Wu Peng, is making the rounds to various government ministers to say good-bye ahead of his return to Beijing where he will be assigned a new, still unannounced posting. On ... 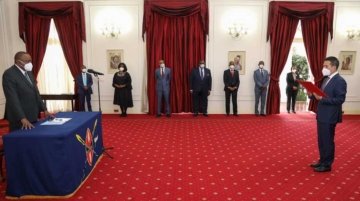 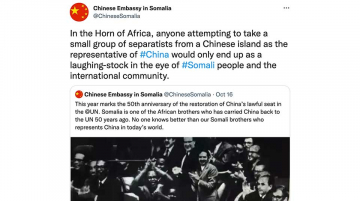 Although China has not said much of Taiwan’s trade office in the self-declared state of Somaliland since it opened last year, it’s nonetheless evident that Taipei’s official presence in the Horn of Africa gives them ...
Previous Story: How Social Media Impacts China-Africa Relations and Migration
Next Story: How to Understand Chinese-Related Environmental Problems in Africa