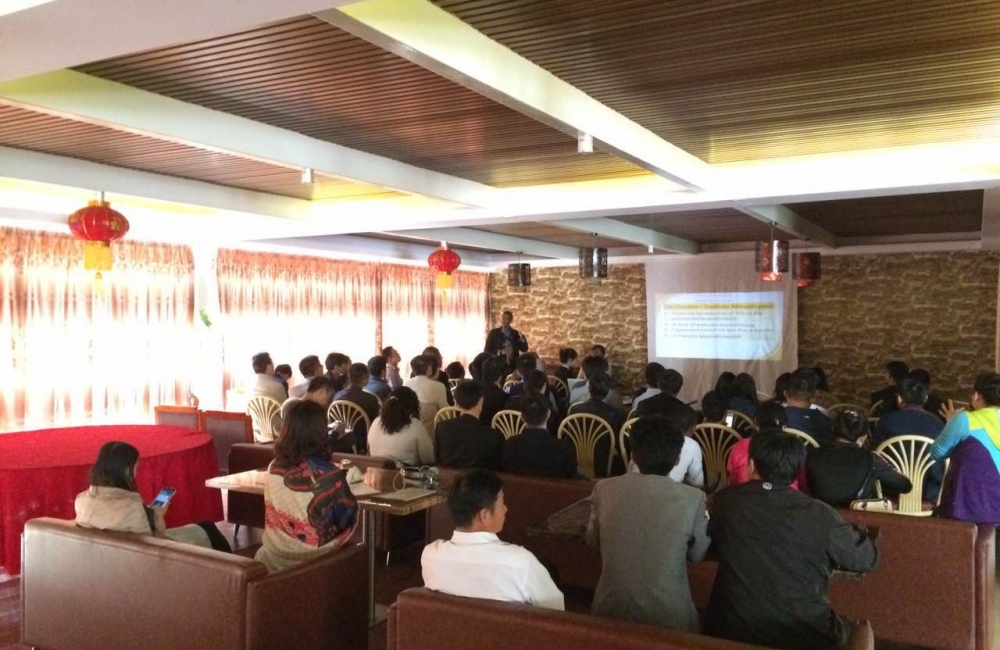 The following article was written Fu Junjie, Gu Ruirui and Liu Luxi, fellows at China House Kenya
Chinese businesses are seeking opportunities in Africa. In recent years, many facets of this phenomenon have been laboriously described. However, in these commentary and analyses there remains a dearth of data, particularly on the perspectives of the perhaps 1 million Chinese said to be on the continent. This allows for the endurance of “myths” relating to the issues Chinese firms are associated with.
With this in mind, we conducted a micro-survey of Chinese nationals in Kenya. We were interested in the legal issues encountered by the Chinese working and living here, because our experience working with Kenya’s Chinese population has demonstrated that legal and regulatory questions weigh heavily on the minds of many. For this research, 81 people responded to our questionnaires, which were distributed at an event attended by 300 Chinese residents of Kenya. 73% of the sample was male and 27% female; 28.4% work at State Owned Enterprises (SOEs), 63% at Privately Owned Enterprises (POEs), and 8.6% at ‘other’ organizations. Most of the participants are in their 20s (55.6%), or 30s (29.6%). While this sample is not representative of the population of Chinese nationals in Kenya, the survey responses do provide insight into the legal issues of Chinese.

The legal and regulatory environment is a major concern for Chinese nationals and firms in Kenya
According to our recently conducted survey, 60.6% of Chinese perceive legal issues as one of their major challenges in Kenya. Legal hurdles similarly affect state owned enterprises (SOEs) and privately owned enterprises (POEs), as well as companies in different industries. The major issues are related to tax law, labor law and immigration law—SOEs and POEs rank the difficulty of these three codes similarly.

As for industry, the legal concerns of firms operating were similarly concentrated on taxation, immigration and labor laws
For Chinese individuals, rather than firms, traffic law is a major concern: “Tax and labor laws concern me more when I consider myself a businessman. I have to face scrutinize from government and make sure that I don’t make any mistakes in the process. However, as an ordinary resident in Kenya, I am more concerned about traffic law because it causes me trouble in daily life,” said Mr. Jiang, the owner of a Chinese casino in Kenya.
The consequences of a lack of knowledge of local laws
Ms. Wang owns a jewelry shop in Kenya. Several months ago, she decided to try her hand at real estate. Intending to buy several properties, she struck a deal with developers. However, she later found out that her ownership of the properties was void, lacking any legal force. The subsequent lawsuit, which has already cost her more than 500,000 Kenyan Shillings (US$5,000), is still ongoing. She regrets that she did not equip herself with necessary legal knowledge and professional services from the beginning. “It is not rare to encounter such dilemma like Ms. Wang if you do not pay adequate attention to legal issues,” explained Mr. Li, who has been in Nairobi more than 20 years. “It is necessary to be equipped with basic legal knowledge for Chinese in Africa.”
Our research demonstrates that Ms. Wang’s case is not an exception for Chinese companies and individuals in Kenya: only 24.7% of the respondents indicate they more or less know about the laws that affect them, even though they do want to learn more about legal knowledge: 91.4% of the respondents are either very or fairly interested in learning more about Kenyan laws.
Chinese companies have a range of preferred sources from which they acquire legal knowledge in Kenya. As the survey shows, besides consulting legal professionals, they prefer informal channels to learning about laws, such as talking to acquaintances. Only 7.4% Chinese companies are willing to talk to government officials for help, revealing the distrust many Chinese nationals feel towards state officials and offices. 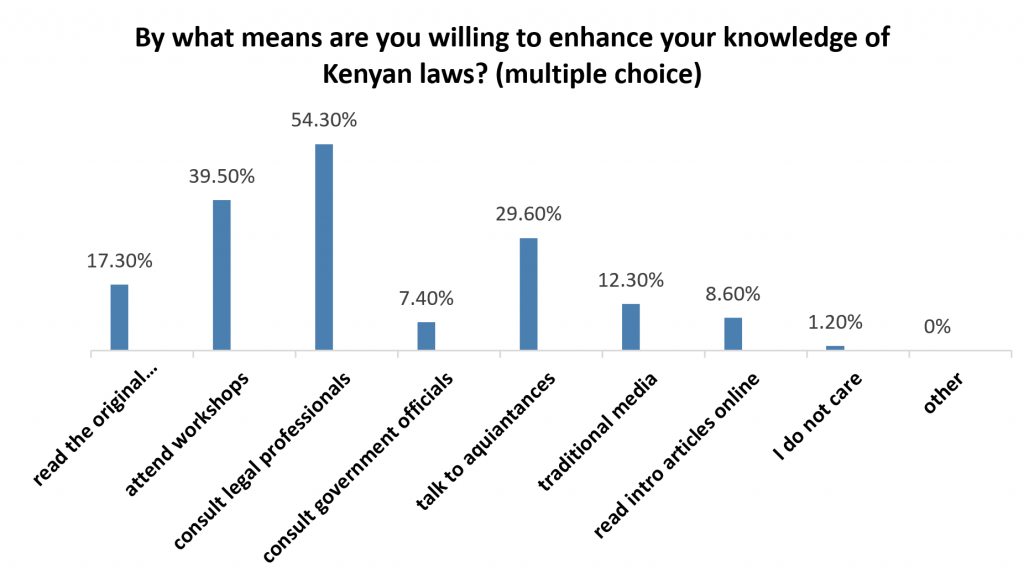 Chinese nationals tend to use informal means to address legal issues, although more are required
61.7% Chinese companies indicate that their difficulties originate from Kenya’s institutional deficiencies and/or the corruption of law enforcement officers. Accordingly, 32% Chinese companies reported that they solve their legal problems by paying government officers off. Only 20% of respondents claim to strictly adhere to legal procedures.
Mrs. Chen is part of that 20%. “Once they get a taste, they just will not stop. I would rather prevent it from happening in the future even though it would cost me more money and be very time consuming,” she explains. Mrs. Chen has been in Kenya for 22 years, and learned a lot in that time period. Paying off government officials creates the risk that they would keep coming harassing Chinese companies, expecting bribes. Some respondents, usually those who are better educated or have relevant experience, place a lot of value on following due process.
While learning legal knowledge is time consuming, other potential solutions, for instance, connecting Chinese with local lawyers and advisers, also have difficulties. 42% Chinese companies blame their attorneys for their legal issues: “Probably because of cultural differences, Kenyan people’s work pace is far slower than Chinese people. They can never finish up their work in line with my expectation.” says Ms. Zhang, a Chinese businesswoman in Kenya.
Although hiring a lawyer can be helpful, only 50.6% Chinese think the legal service they get is “fairly satisfying” and no one think it “very satisfying”. 73.1% of the respondents’ lawyers are introduced by friends. The satisfaction rate of the lawyers known this way is 52.6%, which is identical as the general satisfaction rate for lawyer services. Lawyers found on the Internet only received a satisfaction rate of 30% while lawyers introduced by intermediate agencies are thought satisfactory by 85.7% of the clients.
“If we could build a community mechanism to share information experience like the Indians, that may help,” said Ms. Xie, head of a Chinese tour company who has been in Kenya for a decade. She thinks that while formal channels are still far from satisfactory, community support is very important. But that is not always available due to how the Chinese communities behave. “Chinese companies tend to hide their vulnerabilities. They are not willing to talk to peers about what problems they are encountering for fear that those words will weaken their façade as a successful company. This mentality drives more and more companies to fall for the same tricks.”
It is obvious that Chinese companies in Kenya need more legal knowledge and reliable services. And due to the particular qualities of Chinese people, the solution might be more complicated than a better lawyer. 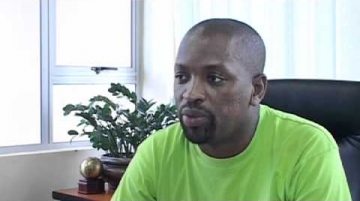 A small, yet highly energetic group of demonstrators marched through the streets of South Africa’s Umlazi Township earlier this month to protest against what they claim is Beijing’s inadequate support for the

Tweet of the Day: Kenyan Truckers Claim SGR is Too Costly, But That’s Shortsighted Says Expert 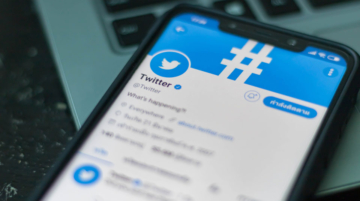 Dr. Zhengli Huang is a Research Associate in the Department of Urban Studies ... 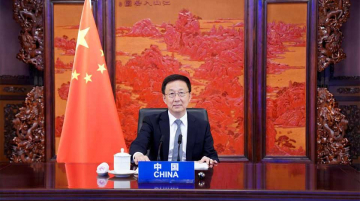 China answered France’s call to support the reallocation of billions of IMF funds that will come from an issuance of $650 billion in new Special Drawing Rights, according to a Foreign Ministry ...
Previous Story: Chinese Migrants in Kenya: Why Do They Seek Religion?
Next Story: What do Kenyans actually think of the Chinese in Kenya?