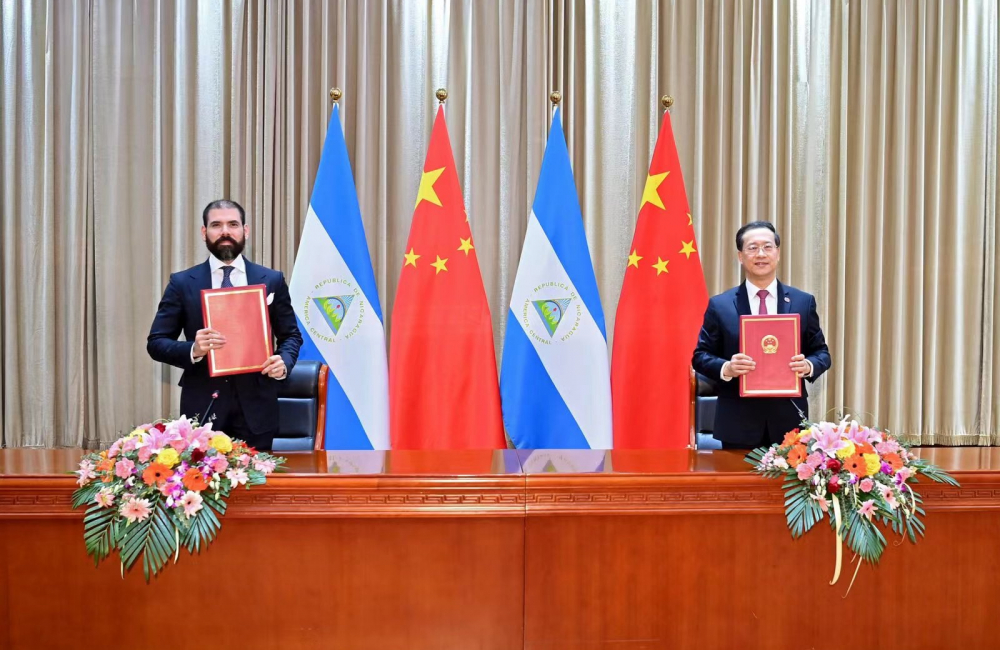 Representatives of Nicaragua and China display their jointly signed communique on the resumption of diplomatic relations. Image via the Chinese Ministry of Foreign Affairs.

Some observers insist that the People’s Republic of China’s (PRC) presence in Latin America and the Caribbean (LAC) is not geopolitically motivated. I acknowledge that Chinese foreign policy may be driven currently mostly by economic, diplomatic, and cultural motives, but I cannot discount geopolitics as a foreign policy motive in a region historically considered Washington’s backyard. This does not mean the PRC has a “secret plan” to “take over” LAC; rather, that as an emerging great power in world politics, Beijing sees LAC as fertile ground for solidifying its own strategic importance, and for getting its One-China Policy recognized around the world.

This tendency is nothing new; historically, LAC has been key to China’s near-universal diplomatic recognition today, beginning with Cuba in 1960 and Chile in 1970. In 1971 seven LAC countries voted to give China’s UN seat to the PRC. By the time the US recognized China diplomatically in 1979, twelve LAC countries had already done so. At present, a total of 25 out of 33 countries in LAC recognize Beijing (even while LAC remains the bastion of recognition of Taipei). The other eight stick to Taipei, a connection that in most cases goes back to the 1940s when Taipei, following instructions from the US during the Cold War, trained vicious anti-Communist military officers from these countries. Encompassing more than half of Taipei’s diplomatic allies globally, the LAC-Taiwan connection still matters to both sides.

Last week Nicaragua became the latest country to sever ties with Taiwan in favor of the PRC by publicly announcing its adherence to the One China Policy and recognizing Beijing as its capital. Analysts expect more countries from the region to follow suit, but it is not as simple as switching from one day to the next. Beijing moved quickly to offer vaccines to Managua, a move consistent with their vaccine diplomacy in the region; on the other hand, the PRC has not celebrated the switch with pomp and circumstance as it usually does with other countries that have abandoned Taiwan recently (e.g., Panama, Dominican Republic, and El Salvador).

This is primarily owing to two reasons:

First, China cannot be convinced that this is a lasting switch, but only a tentative resumption of old diplomatic ties. Managua has recognized Beijing before, in 1985 under the Sandinistas after they rose to power in 1979 with the end of the brutal US-sponsored Somoza dictatorship. But it was a short-lived affair, as Managua moved to re-recognize Taiwan on 6 November 1990, a move that prompted the PRC to suspend diplomatic ties with Nicaragua the next day. Beijing is likely to tread carefully this time around, to avoid another fiasco, and because of the erratic behavior of the current Ortega administration.

Second, Managua’s move likely happened without prior permission from Beijing. Diplomatic relations do not switch from Taipei to Beijing in a vacuum; China must give the go-ahead first. As a former President of the Dominican Republic (DR) confirmed to me in a research interview in 2014, the switch only happens once Beijing is on board. He specifically stated, “We had been trying to switch to the PRC from Taiwan for years, but Beijing had not given us their consent. It is like trying to get into the most popular nightclub: you can queue for a very long time, but you only get in once the bouncer lets you in.” The Dominican Republic finally got through the door in 2018 after years of arduous work by Rosa Ng, a former representative of the DR in Beijing.

The arduous work of Ng and others testifies generally to the persuasiveness and the eventual efficacy of Latin American agency in world affairs; agency, however, is not enough when it comes to China. China is too big and too dynamic to be prevailed upon; it will decide what are the fitting circumstances and optimal timing for anything fundamental to transpire in a given bilateral relationship.

The agonistic Beijing-Taipei geopolitical condominium in LAC will continue for as long as some countries in the region do not adhere to the One China Policy. It is likely that many of the eight remaining LAC countries that recognize Taipei will switch to Beijing in the near future, although it is not certain who will be allowed to get through the door, exactly when. What is certain is that many countries in LAC want to switch. This is attested in an informal conversation the author had with a former Paraguayan Minister of Foreign Affairs, the only country on the South American continent that maintains ties with Taipei. He said, “Why should we keep getting millions from Taiwan when we can get billions from Beijing?” 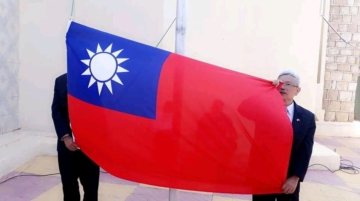 Taiwan opened its newest mission in Africa today at a ceremony in Hargeisa, capital of the self-declared state of Somaliland. Although the new representative office is not quite the same as formal diplomatic ...

Somaliland Should Brace Itself For What Comes Next 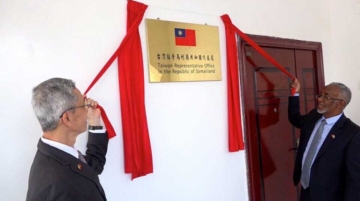 All week I’ve been wondering why China’s response to the opening of the new Taiwan representative office in the capital of Somaliland had been so subdued. Normally, whenever Taipei ventures out into ...

eSwatini Could Soon Be in Play 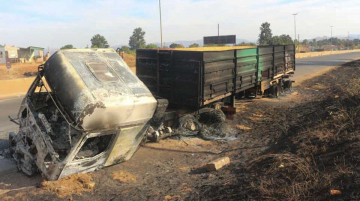 Troops are out on the streets of the tiny southern African kingdom of eSwatini in an effort to quell anti-monarchy protests that look like they could precipitate the fall of King Mswati III. The precise whereabouts ...
Previous Story: What Does ‘African Agency’ Actually Look Like? We’ll See…
Next Story: The Chinese Future of African Television