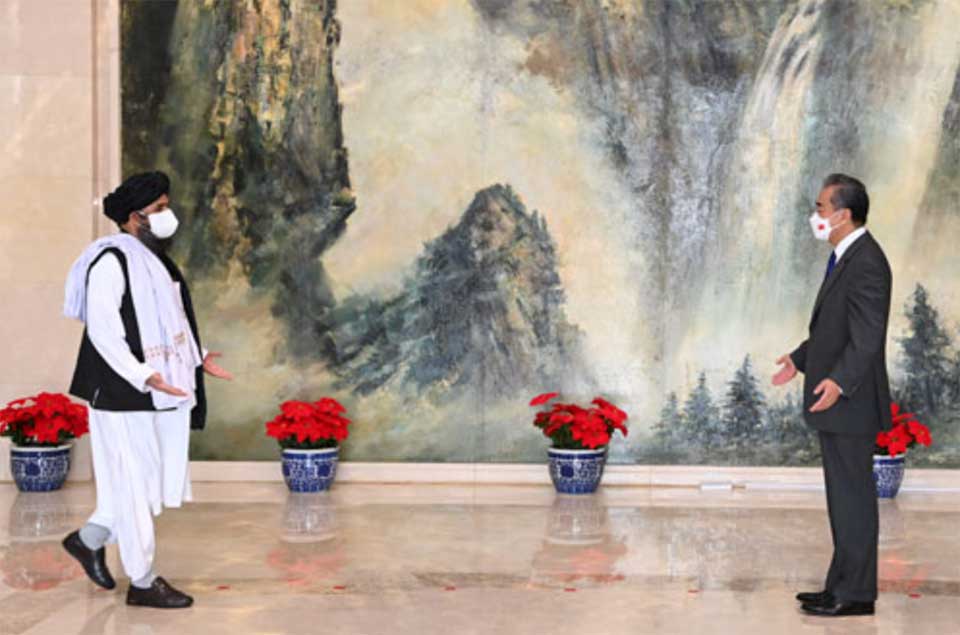 Taliban co-founder Mullah Abdul Ghani Baradar, left, and Chinese Foreign Minister Wang Yi greet each other at a meeting in Tianjin, China, on Wednesday, July 28. Image via the Chinese Ministry of Foreign Affairs.

Over the past week, the crisis in Afghanistan continued to push all else to the periphery. China and Russia abstained from a United Nations Security Council resolution requiring the Taliban to let people leave Afghanistan freely, while President Macron’s proposal of a safe zone around Kabul airport did not make it into the final text, evidently, a diplomatic move to avoid a veto from Beijing and Moscow. China’s rhetoric has remained supportive of finding a solution together with international partners, and China’s Ministry of Foreign Affairs Spokesperson has tacitly welcomed a Russian proposal of a meeting with the US and Pakistan on the situation in Afghanistan.

As we wrote in August, guaranteeing security and minimizing risks is key for Beijing. Events over the past two weeks such as the bombing near Kabul airport on August 26th indicate that the Taliban cannot, at the moment, offer China reliable assurances of a stable security environment. Chinese officials are also still grappling with a marked increase in terrorist attacks on Chinese nationals and projects in neighboring Pakistan. As David Sacks wrote for the Council on Foreign Relations last week: ‘if China is unable to secure its projects in Pakistan, where the government is supportive of BRI and China enjoys strong influence, then it will have even more difficulty doing so in Afghanistan.’

Despite this, many continue to view the chaos and destruction in Afghanistan in terms of victors and spoils. For example, much hype has been afforded to the estimated $1 trillion worth of critical minerals, including rare earth elements (REEs), which sit beneath Afghanistan. If accurate, this would mean Afghanistan is home to the largest mineral reserve of lithium in the world, a metal used in crucial civilian and military electronic devices and components, such as lithium-ion batteries. Chinese companies have several stalled mineral extraction projects in Afghanistan, including the Aynak copper mine in Logar province (the largest single foreign investment in the country to date). But with the US now gone, reports claim China is considering a renewed effort to extract Afghanistan’s precious metals. Smoothly integrated into the Belt and Road Initiative, some commentators have seen this as a welcome opportunity, despite the obvious risks. Are the Taliban, Chinese mining companies, or the Chinese government about to strike metallurgical oil?

Building an expansive mineral extraction system in a war-torn country is obviously difficult. But this doesn’t express the enormous scale of this challenge. The US had a world-class military presence for two decades in Afghanistan, spent billions on developing infrastructure, and still struggled to meaningfully take advantage of what one Pentagon memo called ‘the Saudi Arabia of Lithium’. This was at a time when the U.S. was increasingly cognisant of its dependency on China’s supply chain dominance of critical minerals. This is not to say it’s impossible – however, the political, technical and logistical aspects of accessing and then extracting critical minerals from Afghanistan mean that it is a more complex process than many other examples of resource exploitation. As such, China is not about to grab and dash with the estimated 1.4 million tonnes of lanthanum, praseodymium and neodymium underneath Helmand province.

In fact, there is a persistent mismatch between rhetoric and practice when it comes to China’s investment in Afghanistan. For instance, although China’s ambassador to Afghanistan praised the country’s potential to embrace the Belt and Road Initiative in 2019, Chinese investment amounted to a mere $2.4 million during the first half of 2021, and $4.4 million in all of 2020. And if China’s two major projects, often wrongly cited as evidence of Beijing’s “long-term strategic thinking” and financial clout in the country, are anything to go by, then China’s meager investment footprint is unlikely to change.

Both the Amu Darya basin oil project of China National Petroleum Corporation and the Aynak copper mine project of China Metallurgical Group Corporation and the Jiangxi Copper Company Limited, have encountered considerable head-wind, including persistent security concerns, archaeological digs, issues related to land compensation of locals, and the Chinese firms’ disputes with local partners. The Afghan government reportedly even suspended the Amu Darya concession; supportive infrastructure, including railway connections, power stations, or refineries, have not materialized.

We should of course never underestimate the ability of the Communist Party to plan ahead, sometimes decades at a time. But planning only goes so far. The China that acquired drilling rights in Afghanistan in 2011 was a very different China, both economically and diplomatically speaking.

Beijing’s appetite for risky infrastructure projects abroad has subsided considerably, and mishaps in the major investments in Afghanistan over the last ten years have hardly contributed to a sense of urgency when it comes to exploiting any supposed economic opportunity in the country. After all, the Sudans and Libya should serve as examples that China’s influence for resources bargains do not always live up to the Party’s expectations.

The bottom line is that while the Taliban may promise to protect Chinese investment, any such assurance does not mean it is actually safe. China sees little alternative but to engage the Taliban as they have done over the past weeks, but this does not chart the windy road that lies ahead. Policy planning can try to anticipate but never predict. While we should pay careful attention to Beijing’s diplomatic moves over the next months, it is more than questionable that these will solely be driven by Afghanistan’s supposed resource bonanza.

At the risk of being idealistic, if Chinese policymakers should consider anything, then it is how to leverage any potential economic carrot to extract Taliban concessions on the issues of basic human rights and freedom of movement.

China and the High Stakes Showdown in the DR Congo 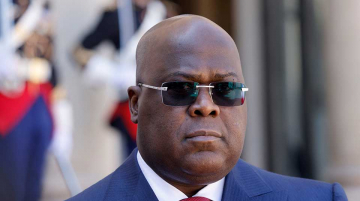 Chinese mining bosses for years played the game as everyone else in the DR Congo. Money pretty much solved every problem. Need a permit? Pay some money. Get in trouble with the law? Pay some ... 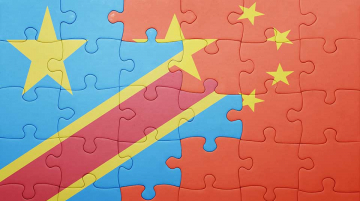 Today we’re featuring a fascinating conversation with the Congolese analyst Christian-Geraud Neema Byamungu about recent developments in the Democratic Republic of Congo. ... 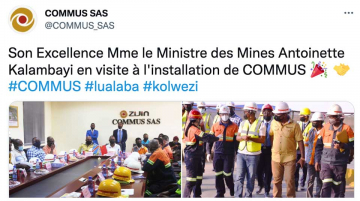 Chinese mining interests in the DR Congo are now pushing back aggressively against the perception that they are unfairly exploit Congo’s natural resources through unfair contracts, avoiding taxes, and not fulfilling corporate social responsibility commitments. ...
Previous Story: Why the Myanmar-China New Passage is Potentially a Very Big Deal For Africa
Next Story: Why Is the Kenyan Government Determined to Hide Its Chinese Loan Contracts?