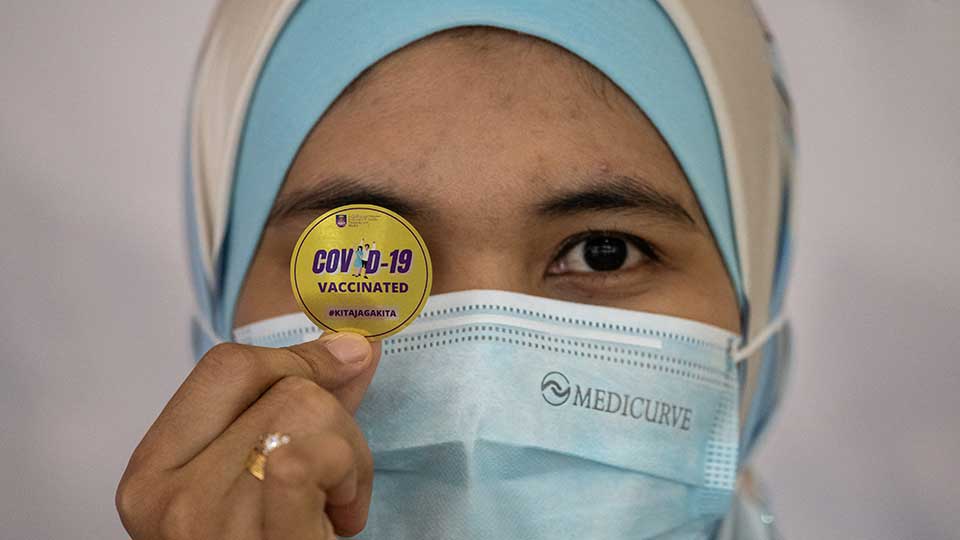 A medical staff poses for picture with a sticker after receiving the Pfizer-BioNTech Covid-19 coronavirus vaccine at the Hospital UiTM in Sungai Buloh on March 2, 2021. Mohd RASFAN / AFP

At present we’re in a moment of both hope and fear. The vaccines are finally rolling out, and with them, we’re seeing a glimmer of a post-COVID world. But is that only a mirage?

The decisions that will decide that answer are being made now. A key one will be how to get a global rollout to happen faster. The longer it takes, and the more piecemeal it is, the more opportunities arise for new variants of the virus to evolve. The more variants we have, the less effective our vaccines will be, and the more we’ll be playing catch-up. The emergence of the South African COVID variant has already undone much of the work that went into the so-called Oxford vaccine by AstraZeneca.

We’re in a race against time to get enough jabs into enough arms around the world to reach critical mass. The logistical challenge of manufacturing, circulating, and storing vaccines is one problem. Another is cost. Countries like Bangladesh or the Democratic Republic of Congo face both these challenges at once. The issue however isn’t simply that if these countries aren’t vaccinated quickly even more people there will suffer and die (true as that is.) It’s also that while these countries remain unvaccinated, any vaccination success in places like New York and London will remain weak and vulnerable to new variants.

Loosening intellectual property restrictions on vaccines has the potential to solve this problem. It will make the vaccines easier to mass-produce, which will bring them to the DRC, Bangladesh, and co. much faster. It will also lower the cost per dose, which will have the same effect.

At present, there is growing pressure on Western governments to loosen Western companies’ grip on this IP. The pressure is interesting in that it doesn’t seem to be replicated on the Chinese or Russian side. Few are clamoring for the rights to the Sputnik vaccine.

This seems to indicate long-term confidence around the world in Western manufacturing. In other words, there’s evidence of pre-existing Western soft power in these demands, and a canny Western government can ride this to a soft power bonanza. Finding a way of sustainably relaxing IP restrictions and helping to mass-produce vaccines globally will position Western countries as a beneficent provider of crucial social goods to the world while protecting hard-won vaccination gains at home. China and Russia have been gunning hard for that position, and now there’s an opportunity for a Western government to swoop in and beat them to it.

However, as we saw for years during the HIV fight, Western governments frequently grab a public health defeat from the jaws of victory. These governments have historically been scared of taking on drug companies, even when their own public health agendas suffer. Americans are still expected to pay about $1,800 per month for anti-HIV drugs, even though a wide roll-out could effectively end HIV as an American health problem because those on treatment can’t transmit the virus and HIV-negative people on treatment can’t be infected.

The question then becomes whether Western governments can overcome the structural biases against poor (and Brown) people that are contributing to politicians’ reluctance to take on Big Pharma in the name of public health. If they can, we have a real chance of moving towards a post-COVID world. If not, mutations will inevitably find their way back to the West and start unraveling the work done there too, even as fragile economies in the Global South slide towards the cliff.