China’s seemingly insatiable demand for African wildlife is pushing dozens, and possibly hundreds of species towards extinction. While elephant and rhino poaching receive most of the attention, chimpanzees, gorillas, and pangolins are among the many other animals that are brutally captured and killed in stunningly high numbers as part of the booming trade in illegal African wildlife. Karl Ammann has spent the past 40 years in Kenya and the Congo basin documenting this bloody trade. Ammann joins us to discuss the effects of surging Chinese demand for Africa’s animals.

Ammann started his career in Africa as a photographer in the early 1980s, photographing cheetahs, but later turned to work on great apes. In 1988, he became witness to the bushmeat trade and has since worked hard to bring the trade and its effect (particularly on great apes) to the attention of the conservation community and the world. Using his photography skills, he has taken pictures of the victims of the bushmeat trade that to many were shocking and revolting, and he has been accused of exaggerating the problems. With the publishing of the books Eating Apes (with Dale Peterson) and Consuming Nature, the problem has come to the attention of the world.

In his years working in Congo, Ammann has funded and supported the research of another population of extremely large-bodied Eastern chimpanzee now known as the Bili Ape. Though it has been studied by prominent researchers, much remains to be discovered about its distribution and behavior. Because it is currently hunted as part of the DRC’s bushmeat trade it is vital to continue research in this area before this population is eliminated. 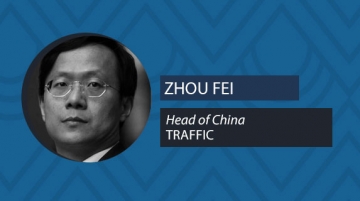 Environmental and conservation issues have long been secondary priorities in the Sino-African relationship, lagging far behind economic development. Pollution, over-fishing, poaching and other ecological problems ...

Does Just One Man in China Control the Fate of Africa's Elephants?