The last time the United States fought a Cold War it led to devastating, long term consequences for Africa. Now, as the U.S. moves to challenge China’s growing influence around the world, Africa risks becoming collateral damage in yet another great power rivalry.

Rand Corporation Policy Analyst Ali Wyne joins Eric & Cobus to discuss his recent article that explores whether the United States and China are embarking on a 21st century Cold War.

Ali Wyne is a Washington, DC-based policy analyst at the RAND Corporation, a nonresident senior fellow at the Atlantic Council, and a nonresident fellow at the Modern War Institute.  He serves as rapporteur for a U.S. National Intelligence Council working group that analyzes trends in world order.

Wyne served as a junior fellow at the Carnegie Endowment for International Peace from 2008 to 2009 and as a research assistant at the Belfer Center for Science and International Affairs from 2009 to 2012.  From January to July 2013 he worked on a team that prepared Samantha Power for her confirmation hearing to be U.S. Ambassador to the United Nations.  From 2014 to 2015 he served on RAND’s adjunct staff, working with the late Richard Solomon on RAND’s Strategic Rethink series.

Wyne received dual degrees in management science and political science from MIT (2008) and earned his Master in Public Policy from the Harvard Kennedy School (2017).  While at the Kennedy School he served on a Hillary for America working group on U.S. policy toward Asia.

Wyne is a coauthor of Lee Kuan Yew: The Grand Master’s Insights on China, the United States, and the World (2013) and a contributing author to Power Relations in the Twenty-First Century: Mapping a Multipolar World? (2017) and the Routledge Handbook of Public Diplomacy (2008).

How China & U.S. Are "Complementary Rivals" in Africa

There is a persistent meme within the international media that China’s rise in Africa represents a “new scramble” for resources on the continent or ...

China Turns up the Pressure on Eswatini to Abandon Taiwan 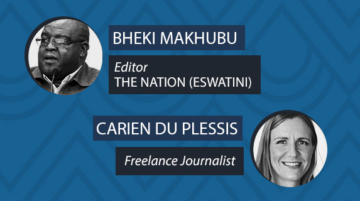 The tiny landlocked kingdom of Eswatini, formerly known as Swaziland, is now the last country in Africa to maintain diplomatic relations with Taiwan. This is ...

There’s an emerging consensus in Washington, D.C. that a future Biden foreign policy towards Africa is probably going to look a lot like the policies ...
Previous Story: The Rise of Chinese Tech in Africa is Both Feared and Embraced
Next Story: Why China Doesn't Need to Worry about Washington's New Africa Policy