“When the buying stops, the killing can too” reads the popular slogan that WildAid uses in its anti-ivory campaign to raise awareness in China. WildAid, along with most Western environmentalists, contend that curbing demand in China for ivory is the key factor to help save the African elephant from extinction.

Damien Mander disagrees. Mander is the founder of the International Anti-Poaching Foundation and a leader in a new movement that is militarizing the fight against illegal wildlife poaching in southern Africa. Mander is a former Australia special forces soldier who also served multiple tours in Iraq as private military contractor. Today, he trains wildlife protection teams throughout southern Africa where he says the fight to save these animals will not be won by curbing demand in Asia but combating the organized crime syndicates that run the illegal ivory trade.

Damien Mander joins Eric & Cobus to discuss what he thinks needs to be done to save Africa’s rapidly shrinking elephant population. 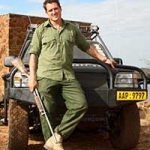 Damien Mander served as a Special Operations Sniper and Clearance Diver in the Australian Defence Force. Whilst deployed in Iraq he Project Managed the Iraq Special Police Training Academy, overseeing training of up to 700 cadets at one time. Following 3 years on the frontlines of the Iraq war he departed in 2008 with no new direction in life.

A trip to Africa left him face-to-face with the horrors that the worlds wildlife is facing. Liquidating his personal assets from his time in the military, he founded the International Anti-Poaching Foundation. The IAPF focuses on ranger training, operations and integrating modern technology such as drones into conservation.

Damien is a soldier turned anti-poaching crusader. A vegan, he resides with his wife Maria and son Leo in Southern Africa bush.

Watch Damien’s compelling 2013 TEDx Talk about how he became involved in wildlife protection:

Elephant and rhino poaching top the agenda again on the show this week following a pair of very high-profile media stories from the New York ...

A recent report by the UK-based Environmental Investigation Agency (EIA) alleges Chinese diplomats and officials are directly involved in the ivory trade in Africa. Most ... 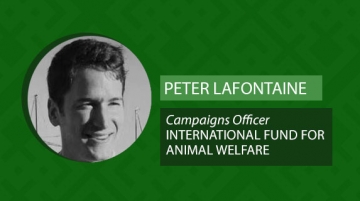 China’s surprise announcement that it will phase out the trade and manufacturing of ivory came as a rare piece of good ...
Previous Story: China's Risky Gamble to Become a Major Player in the Mideast & North Africa
Next Story: China/Africa vs. China/South America