There is a lot of confusion in some parts of the world, including Africa, as to what role the United States wants to play in the current international order. On the one hand, institutions like the State Department, Pentagon, and USAID maintain that Washington aims to continue its leadership role in promoting open markets, free trade, and democracy around the world. While at the same time, there are conflicting signals that come from the Trump administration in support of building walls, imposing tariffs and offering more support to dictators in North Korea, Saudi Arabia, and Russia than America’s traditional allies.

Africa highlights this apparent contradiction in the U.S. approach. Early on in his presidency, Trump moved to ban travel from certain Muslim countries, including Chad, he also stripped Rwanda of its free trade privileges with the U.S. and imposed tariffs on steel from countries like South Africa. So, while none of this looks very encouraging, the White House also asserts that it is determined to step up its engagement in Africa, in part to challenge China’s rising influence on the continent.

Last December, National Security Advisor John Bolton unveiled the administration’s new strategy for Africa, known as “Prosper Africa,” where he said the word “China” no less than 14 times. While China is clearly on the minds of U.S. policymakers, the Director of African studies at the U.S. Army War College, Colonel Chris Wyatt, argues that it would be a mistake to think that the Prosper Africa strategy is more about China than Africa.

“China is not the story here,” said Colonel Wyatt in an article published on the War Room blog at the U.S. Army War College.  “The story here is a stated position that those who work with Washington on things in their mutual interests, those who adhere to good governance, those who are helpful, reliable regional partners and those who do not actively work against the interests of the U.S. will be the ones who receive the bulk of U.S. assistance in Africa,” he added.

Bolton listed, in order of priority, three pillars of the new U.S. strategy for Africa:

Central to the new U.S. strategy in Africa is the advancement of American trade and commercial ties. In addition to the imposition of tariffs on steel, the White House is also stepping up its development finance program that is intended to benefit both American companies and recipient firms in Africa and other developing countries. The passage of the 2018 BUILD Act provided the once near-death Overseas Private Investment Corporation (OPIC) with an injection of $60 billion to fund private sector investment.
While the new, wealthier OPIC is often positioned as a rival to China’s massive spending on infrastructure development, the reality is that the U.S. and China are actually taking radically different approaches to the development finance strategies that in many ways are actually more complementary than competitive. Rather than fund large state-backed infrastructure projects, as China prefers, OPIC will instead provide financing to private sector enterprises, mostly small-to-medium size firms, who have difficulties accessing capital.

Which Way for the U.S.A?

U.S. foreign policy in Africa and around the world is indeed changing but not as dramatically as many people might think. A lot of the ideas that are being implemented by the White House today have been developed over years, even decades, in Washington’s conservative think tanks like the Heritage Foundation and American Enterprise Institute among others. Similarly, Bolton is among a number of high profile national security policymaker who have spent years articulating their more assertive worldview on Fox News and other conservative media outlets. So, little of what we are seeing today should come as much of a surprise.
Yet, it’s still confusing for many who are struggling to understand Trump’s foreign policy and the conservative intellectual foundation it was built on.
Colonel Wyatt joins Eric and Cobus to discuss the current conservative worldview guiding U.S. foreign policy in Africa. Although Colonel Wyatt is an active duty officer in the United States military, his comments in this week’s podcast represent his personal views and not those of the Pentagon or the United States government. 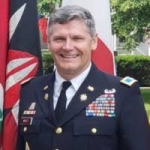 Colonel William M. (Chris) Wyatt is Director of African Studies of the United States Army War College and a professional military officer with more than 36 years of experience in security, international development and education in Africa, Europe, Southwest Asia, and North America. He received his commission as a Military Intelligence Officer from Ohio University in 1989. He is a graduate of the Military Intelligence Officer Basic and Advanced Courses, the Counterintelligence course, the Signals Intelligence course, Combined Arms Services and Staff School, Air Assault School, Command and General Staff College, and the United States Army War College. Prior to his arrival at Carlisle Barracks, he was assigned to the U.S. Mission to the African Union in Addis Ababa, Ethiopia, where he was the Senior Military Advisor to the mission and the U.S. Africa Command Liaison Officer to the African Union. 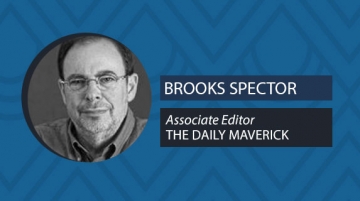 There’s an emerging consensus in Washington, D.C. that a future Biden foreign policy towards Africa is probably going to look a lot like the policies ...
Previous Story: Chinese and Africans are Having Totally Different Conversations About Their Relationship
Next Story: Gabon Takes Action Against Chinese Logging Company Following Damning Report