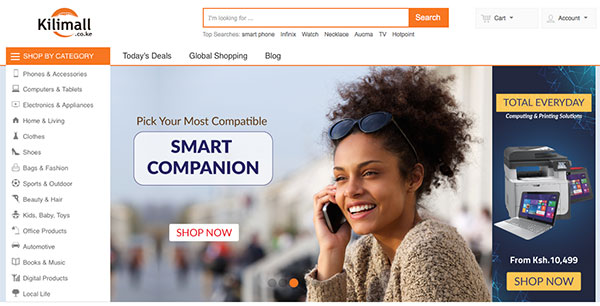 The following article was written by Dong Yuntong, a fellow at China House Kenya

“I usually check online shopping websites because I like their convenience, relatively guaranteed quality and affordability,” explains John. Despite working in one of the biggest shopping centers in Nairobi, Kenya, over the past few years he has found himself more and more enjoying online shopping, which he feels fits his lifestyle.
Online shopping is getting increasingly popular in Kenya. According to our survey, in which we interviewed 40 people living and working in Nairobi, including students, young professionals, senior citizens, shop owners, and slum residents, 52% of them have tried online shopping. Based on their responses, Jumia and Kilimall seem to be the best-known B2C (business to customer) e-commerce platforms in Kenya, with 89% and 51% of interviewees respectively claiming to have bought things on these two websites.

Although in US and China e-commerce has been popular for a while, in Africa it has really taken off over just the past few years. According to one source, in seven Sub-Saharan countries, e-commerce makes up 1-3% of GDP, and is predicted to make up 10% of total retail sales in key markets by 2025, with 40% annual growth over the next 10 years.

While Nigeria is currently the most prosperous e-commerce market in Africa, Kenyan e-commerce is also expanding rapidly. According to the Communications Authority of Kenya, the e-commerce market in Kenya was worth around Ksh4.3 billion (USD 41 million) in 2014. With a relatively high level of Internet penetration (82.6% and 35.5 million users), Kenya is ripe for a digital commerce explosion: ‘’Ksh3 billion in mobile transactions have already taken place in Kenya each day,” said Dr. Rutendo Hwindingwi, Associate Director at Deloitte South Africa.

With e-commerce magnates such as Alibaba and JD taking the lead domestically in China, some Chinese businessmen are seizing the opportunity to develop e-commerce platforms in the emerging African market.

Kilimall, founded in 2014 by Yang Tao who came to Kenya in 2010 and worked in Huawei, may be one of the most established Chinese-background online shopping company in Africa.

In his interview with the business publication How They Made It in Africa, Yang Tao said he wanted to reduce the transaction cost in middle chain via e-commerce. As of now, there have been more than 5,000 merchants that sell their products on Kilimall, according to the company.

Today, Kilimall is working in three African countries. “In Kenya, our order amount has actually caught up with Jumia’s,” claims Liu, the Marketing Manager of Kilimall in Kenya.

“Kilimall is going up; actually I think it is taking over Kenyan market. I use it very often,” said a young Kenyan marketing professional working in Nairobi. He wondered if Kilimall is slowly but surely influencing his lifestyle, offering a variety of products directly targeting him.

58% our interviewees had heard of Kilimall, although 29% of them say they have never shopped online. However, Kilimall has not invested much in adverting, choosing to focus on improving operations and developing the capacity to offer one-day delivery service probably in 2017.

Although Jumia currently occupies a larger market share in Kenya, one of Kilimall’s advantages is the price: 50% of the interviewees who have shopped on both Kilimall and other websites claimed Kilimall was the cheapest. A 25-year-old college student told us: “Even with shipping fee, I still pay a lower price than other shopping websites. I bought my cell phone with 68% discount on Black Friday!” “The commission we charge is very modest so the customers can enjoy a much better price,” Liu from Kilimall explained. Yet good price does not guarantee good feedback. A Kenyan blogger, for example, at first posted a scathing review on Kilimall Facebook page because previous bad reviews worried her, but when she received the items she posted about her good shopping experience.

Kilimall also does well in the sales of electronics and clothing. “I waited for black Friday to buy my cellphone from Kilimall,” said a 24-year-old man shopping at a supermarket. He showed us his cellphone proudly. Recent statistics from mobile carrier Safaricom shows that over 100,000 new smartphones are sold each month in Kenya, among which some Chinese phones are bestsellers. Given its links to China, Kilimall may have an advantage in selling Chinese products, and can offers a cheaper price than any other websites, according to Liu.

However, Kilimall still faces many challenges. “Yeah, we keep an eye on them because we are number one and they are number two in Kenya, but they are no threat to Jumia,” claimed Peter, an operation manager of Jumia Kenya. According to Peter, Kilimall has been known to sometimes deliver the wrong items.  “Africa is a very different market in terms of logistics and infrastructure, Jumia is the only one to get close to doing something good, but still not good enough. For example e-commerce platforms here face failed delivery more than elsewhere as online payment is not common yet, and sometimes people just do not have the money to pay when their orders are delivered to them.”

“Kilimall’s product variety is relatively low. It is difficult to find my favorite style in Kilimall. I prefer Jumia, although it is only a little better.” said a young woman from University of Nairobi. 60% interviewees told us they found there were less options in online shopping websites than the offline stores, while 40% emphasized Kilimall offered less options than Jumia.

Due to infrastructure deficits of Kenya, logistics have also been a great challenge to Kilimall—some interviewees mentioned that they have experienced long delays. “I can no longer wait such a long time for my next clothes, and it can even make me miss the season, so I may drop Kilimall in the future,” said a fashionable lady picking clothes in the shopping center. “During Black Friday the delivery was actually doing fine. The main problem was that the vendors were not able to update their inventory so sometimes customers end up ordering things that were already out of stock.” Liu felt communications with vendors was important in addressing logistic challenges.

Eager to use China’s e-commerce experience to develop Africans’ convenient and cheap shopping channel, Kilimall knows its challenges due to Africa’s very specific infrastructural context, and has been working to make improvements. When questioned why there are few who know that Kilimall is a Chinese background company, Liu explained: “We do not hide, but it is nothing to be emphasized, just like Jumia is also managed by foreigners. Indeed, we started here and we are a Kenyan company, and the employment is more and more localized. Ideally Killmall can function without Chinese.”

As for Jumia, Liu calmly explained: “They entered Kenya market two years before us and got more fund, but they are not unchallenged. We have come so far in only two years and I believe this is our time now.”

Dong Yuntong is a student at Ningbo University

How Chinese Companies Deal with Labor Strikes and Unions in Kenya 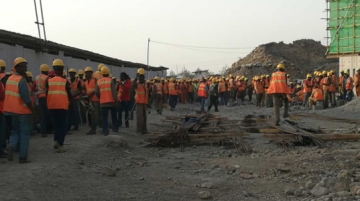 The following article was written by Tang Yuchen, a youth fellow at China House Kenya in Nairobi “There were hundreds of thousands of people, like a black storm sweeping across the field. Tires were burned, ...

How Chinese Companies Deal with Labor Strikes and Unions in Kenya

“There were hundreds of thousands of people, like a black storm sweeping across the field. Tires were burned, stones were thrown everywhere as if it was a war movie”, Mr. Lu painfully recalled his first ...

“Honestly, we don’t want any female workers here.” Ms. Zhou, manager of an upscale Chinese restaurant in Nairobi, put it without hesitation. Indeed, local women are under-represented in Chinese companies operating in Kenya. Over the ...
Previous Story: From Aid to Business: Chinese Medical Companies Arrive in Africa
Next Story: In Kenya, When Young Chinese Met The Maasai For Anti-Female Genital Mutilation: A Reflection of Chinese Volunteers In Africa